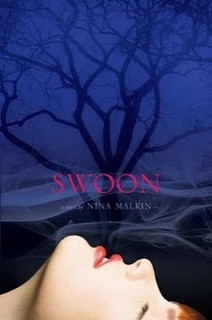 Pages: 425
Publisher: Simon Pulse
Publication Date: May 4, 2010
My Edition: ARC Paperback
Reading Level: Young Adult
Recieved From: Nina Malkin
Author's Website: ninamalkin.com
Summary from Goodreads:
This year, Essie Green’s life is going to be different. She’s made the cheerleading squad and caught the eye of the captain of the football team
...more Torn from her native New York City and dumped in the land of cookie-cutter preps, Candice is resigned to accept her posh, dull fate. Nothing ever happens in Swoon, Connecticut...until Dice's perfect, privileged cousin Penelope nearly dies in a fall from an old tree, and her spirit intertwines with that of a ghost. His name? Sinclair Youngblood Powers. His mission? Revenge. And while Pen is oblivious to the possession, Dice is all too aware of Sin. She's intensely drawn to him -- but not at all crazy about the havoc he's wreaking. Determined to exorcise the demon, Dice accidentally sets Sin loose, gives him flesh, makes him formidable. Now she must destroy an even more potent -- and irresistible -- adversary, before the whole town succumbs to Sin's will. Only trouble is, she's in love with him. What do you do when the boy of your dreams is too bad to be true?
A fresh, urban twist on the classic tale of star-crossed lovers.
When Brittany Ellis walks into chemistry class on the first day of senior year,...more
Review:
Throughout Swoon, Nina Malkin described and wrote an interesting and a definite swoon-worthy paranormal story with many colorful and enjoyable characters. Right from the start, I was engaged in the story and then became instantly hooked because of the unique beginning. However after reading the first 200 pages or so, I suddenly became a tad bored and thought it just kept dragging on and on which explains why it took me about a week to finish. Despite the dragging, I highly enjoyed the story and the paranormal romance aspects. By the end, it did speed up and did wrap everything up which is why I finished the end pretty quickly.

Candice aka Dice and the girls of Swoon with their single syllable nicknames surely made the story of the town of Swoon highly amusing and intriguing. After moving from her hometown New York, Dice is accepted only because of her über popular cousin Pen because she isn't a perfect blond like all the other Swoon girls. When Pen falls from a tree causing a vengeful spirit from over 200 hundred years ago to possess and take over her mind and body, the whole town starts to dramatically change. Dice finds herself instantly falling for the spirit, Sin, after she realizes what he is and that he's in her cousin. Sin's spirit is then released after a failed exorcism and begins to wreck havoc on Swoon for revenge of the death of his former love on the family members of those responsible for his death. The story continues through the very complicated back story of Sin and the messy relationship between Dice, Pen, and of course Sin.

I thought the girls' single syllabled nicknames were pretty funny and cute and also loved the name Sin as the definition pretty much describes his character completely. The town name, cover, and tagline were all just perfect! I also loved Dice and Sin's relationship but wish Dice could have had the perfect relationship with Sin in the end because I really liked her character. The ending wrapped up the confusion of Sin's past and even resulted in the conclusion of his unrest over his death and the unsolved murder. The ending was definitely much faster paced and had some very surprising moments.

Overall, Swoon was a great story but could have been a little better if it wasn't as long and had moved along a little faster. If you want to swoon like me and the rest of the girls from Swoon, then I would pick up a copy of Swoon today!
Rating:

Posted by AnAddictedBookReader at 10:46 PM