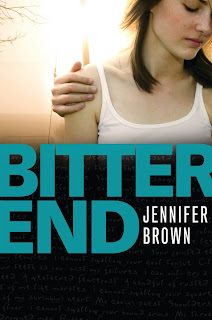 At first, Alex is blissfully happy. Sure, Cole seems a little jealous of her relationship with her close friend Zack, but what guy would want his girlfriend spending all her time with another boy? As the months pass, though, Alex can no longer ignore Cole's small put-downs, pinches, or increasingly violent threats.

As Alex struggles to come to terms with the sweet boyfriend she fell in love with and the boyfriend whose "love" she no longer recognizes, she is forced to choose -- between her "true love" and herself.
Review:
Whoa, Bitter End was such an emotional, raw story that had my attention until the very dramatic end. I could very easily relate to the main character Alex, and it certainly made me realize how easy it is to be taken advantage of and mistreated by a boyfriend. If I would ever be in a situation like Alex's, I feel like I would most likely be able to handle myself better in that situation right from the beginning. I hope to never have to experience the hardships Alex went through (abusive/manipulative boyfriend, dead mother, and a father who's too depressed to care). I felt her character was a very well developed and was a strong female lead with some minor flaws that made her even more interesting to read about.
Despite the dour setting and topic, the novel was still very enjoyable to read about. At times, it was a little hard since the violent actions of Alex's boyfriend were so astonishing violent and mean. Her boyfriend seemed nice and perfect at first, but when he snaps and changes, the novel instantly changes from happy and fun to scary and angry. I would definitely recommend that all teenage girls read this novel since this situation can happen to the best of us. I'm really looking forward to reading Jennifer Brown's first book since this one was so impactful and great. This May 10th, I would absolutely recommend picking up a copy when it comes out!

Posted by AnAddictedBookReader at 2:09 PM 4 comments:

Once again it's been soooo long since my last post which was a books read update with a tiny review and rating of the books. I'm sorry for such a long absence, but I've have been reading some and a lot of pretty amazing ones at that! This is another post dedicated to those books I've read since the last post with some brief adjectives and thoughts of mine on each book and my rating. These are the books that I've read since the last post:

Ruined: How to Ruin Books 1, 2, & 3 by Simone Elkeles (Paperback)
4.5 stars: lovable characters with some really irritating ones too, romantic and fun stories, great sequels (except the 2nd one was a little boring at times), interesting Israeli culture added in, perfect ending, altogether exciting and hard to put down (read all 3 books in a day...yes they were just that good and hard to put down!)

Leaving Paradise and Return to Paradise
by Simone Elkeles (Paperbacks)
5 stars: AMAZING, powerful, I just adore all of Simone's books!, read both books in a little over a day, loved loved loved the characters, very emotional pasts that made the story so interesting

Scandal and Vanished: Private Books 11 & 12
by Simone Elkeles (Paperbacks)
4 stars: surprising as always, shocking turn of events all throughout, great additions to the series, huge cliffhanger at the end of both, can't wait for the newest book to come out!

Nefertiti by Michelle Moran (Paperback)
5 stars: a fantastic historical fiction story about the reign of Nefertiti from the view of her sister, loved the Egyptian culture/history/romance, overall so amazing, enduring and lovable characters, sad ending however, I just love anything by Michelle Moran!

Posted by AnAddictedBookReader at 6:40 PM 3 comments: