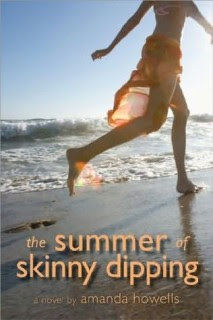 Title: The Summer of Skinny Dipping
Author: Amanda Howells
Pages: 304
Publisher: Sourcebooks Fire
Publication Date: June 1, 2010
My Edition: ARC Paperback
Reading Level: Young Adult
Challenge Read for: 2010 Debut Author Challenge
Received from: Sourcebooks for review
Summary from Goodreads:
"Sometimes I still wake up shivering in the early hours of the morning, drowning in dreams of being out there in the ocean that summer, of looking up at the moon and feeling as invisible and free as a fish. But I'm jumping ahead, and to tell the story right I have to go back to the very beginning. To a place called Indigo Beach. To a boy with pale skin that glowed against the dark waves. To the start of something neither of us could have predicted, and which would mark us forever, making everything that came after and before seem like it belonged to another life. My name is Mia Gordon: I was sixteen years old, and I remember everything...."

After getting dumped by her boyfriend, Mia is looking forward to spending a relaxing summer in the Hamptons with her glamorous cousins. But when she arrives she find her cousins distant, moody, and caught up with a fast crowd. Mia finds herself lonelier than ever, until she meets her next-door-neighbor, Simon Ross. And from the very first time he encourages her to go skinny dipping, she's caught in a current impossible to resist.

Timeless in feel, The Summer of Skinny-Dipping is a poignant, literary coming-of-age romance that will live on long after summer has ended.

Review:
The Summer of Skinny Dipping was much different than I was expecting but in a very good way. I didn't expect the great and emotional story and definitely not the sad and dramatic ending. The writing and story line was very detailed and easy to follow. I read it fairly quickly and even cried pretty hard at the ending. It is a perfect summer read which is good since summer is approaching quickly! I've loved basically every debut novel I've read so far this year, and this has held up as a really great one also.

The story begins with Mia who was just dumped by her first boyfriend and is going to spend the summer in the Hamptons with her family at her aunt's and cousins' beach house. She used to have a close relationship with her cousin but when she arrives she finds her cousin changed, distant, and moody with major issues. When Mia meets the boy next door Simon, everything starts to change. They start to form a close relationship as friends and then bond over late nights. The story focuses on solving family problems, finding first true love, and most importantly learning how to trust and how to be a friend.

The story moved along quickly from each night to the next and had absolutely no dull moments. I enjoyed reading about the late night swims Mia and Simon went on and especially enjoyed once they started to really bond and open up to one another. Mia's cousins were very irritating at times since they were total snobs, but as I found out more about their situation, they became more tolerable to read. At the beginning of the summer, Mia was a troubled teen with many family and self issues, but by the end of the summer, she finally found her true self and experienced the best summer of her life.
The Summer of Skinny Dipping reminded me a lot of Twenty Boy Summer by Sarah Ockler because of the similar themes, but both had a very different storyline. If you liked Ockler's book or want to read a fun summer book, then I would definitely recommend reading The Summer of Skinny Dipping. Since I really enjoyed Howells's first YA novel, I'm looking forward to reading more YA stories by her in the future!

Posted by AnAddictedBookReader at 5:20 PM