Daffodils and The Prince of Powys
By Cornelia Amiri

I live in Houston, Texas, a climate that is usually warm, so I’m already thinking about and looking forward to spring. The ancient Celts like most people loved spring. The ancient Celtic festival Imbolc, which takes place next month, February 1st, ushered in spring. When I think of spring, I often think of Daffodils. Not only are yellow daffodils the essence of spring but they also hold a place of sacred honor to the Welsh. 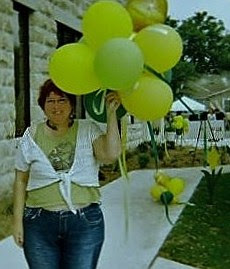 One of the daffodil's many Welsh names is Cenhinen Bedr (Peter's leek). St. David, also known as Dewi, the patron saint of Wales, was a monk who lived on bread, water, herbs and leeks. The day he died, March 1, 589 A. D., is celebrated each year in Wales as St. David’s day. At the battle of Heathfield in 633 AD, which took place in a field of leeks, St. David told the Welsh warriors to wear a leek on their helmet so they could tell them apart from the Saxons they were fighting. Legend has it that the wild daffodils open their buds on March 1st to remind people of Saint David. Also Welsh soldiers wear a leek or daffodil in their caps each year on St. David's Day. Daffodils are often worn in place of leeks in hats and buttonholes, because they’re prettier and smell much sweeter.

Even warriors, both present and past, loved daffodils. The 8th century Welsh Warrior King, Elisedd, has a pillar, a standing cross his grandson erected to honor his deeds in battle, which still stands in Powys near Eglwyseg Mountain.

In my new young adult novel, The Prince of Powys, King Elisedd picked daffodils at the hill fort of Dynas Bran and discovered the magic within them as he said, “Men like your sire and I are warrior kings. We have no time for pretty words and daffodils. We must look after our land and our people." As the stern-faced king spoke those words, he twirled a daffodil in hand.

Branda covered her trembling lips to keep from laughing. She gathered a bouquet of the yellow flowers and handed them to the king.

”Don’t tell Carthann that you picked these flowers," Elisedd said.

“No." Branda leaned in close to him. "Are you going to give her the daffodils?"

"Yes. Let her think I picked them, for it was my intent. It is why I offered to bring you here, I remember a time when I picked daffodils for her. The summer scents and a pretty maid meant much to me. You make me feel young again girl."

Blurb for The Prince of Powys:
In an age of heroes, Branda, a Saxon princess helps Blaise, a Prince of Powys, escape her father’s stronghold. In turn, he vows to escort the princess to her sister in Scotland so she can escape an arranged marriage. Instead, he holds her captive as his hostage in the unbreachable hill fort of Dinas Bran, where she captures his heart. Will Blaise be forced to throw away his honor for love or to tear out his heart for honor?


I included a picture of me with daffodil balloons at the Dafodill Festival in Round Rock Texas. For more more information about my young adult fantasy/romance, The Prince of Powys, please visit http://www.eternalpress.biz/book.php?isbn=9781615725823 or my website http://CelticromanceQueen.com.

Blogging Contest:
I am giving away a Celtic leather bracelet. Please post a comment or question below and a winner will be randomly selected. Include you email so I can contact you if you win.

Thanks for stopping by Cornelia!
And be sure to check out her website and comment below to win the bracelet :)

Posted by AnAddictedBookReader at 1:04 PM