Catcher in the Rye Review 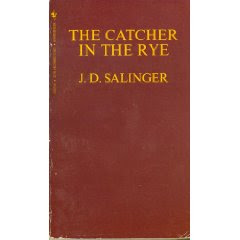 Title: Catcher in the Rye
Author: J.D. Salinger
Publisher: Bantam
Publication Date: November 1, 1984
Pages: 214
My Edition: Paperback
Reading Level: ---
Where I got it: This old copy is my mom's and who knows where she got it : )
Description (From Goodreads):
Since his debut in 1951 as The Catcher in the Rye, Holden Caulfield has been synonymous with "cynical adolescent." Holden narrates the story of a couple of days in his sixteen-year-old life, just after he's been expelled from prep school, in a slang that sounds edgy even today and keeps this novel on banned book lists. It begins, "If you really want to hear about it, the first thing you'll probably want to know is where I was born and what my lousy childhood was like, and how my parents were occupied and all before they had me, and all that David Copperfield kind of crap, but I don't feel like going into it, if you want to know the truth. In the first place, that stuff bores me, and in the second place, my parents would have about two hemorrhages apiece if I told anything pretty personal about them." His constant wry observations about what he encounters, from teachers to phonies (the two of course are not mutually exclusive) capture the essence of the eternal teenage experience of alienation.
Review:
Catcher in the Rye takes place in two days in Holden's confused life. He's expelled from multiple boarding schools and just got expelled again. He is expelled for failing several classes because he just doesn't care anymore. After he is expelled, he doesn't want to go home to face his parents, so he wanders around NYC trying to find things to do. He doesn't like the "phonies" in the world and is very pessimistic. He's also a rich boy who wastes a lot of money trying to entertain himself which results in a prostitute, a fight, argument with a girl, and lost money. In my opinion, I don't understand what was the point of the book. It was pretty decent and not as boring as I thought it would be. Holden's thoughts and dialogue was pretty funny. Every second he swears which is kind of funny but annoying. It took a long time to finish it because it didn't keep me hooked. I recommend and don't recommend reading this. Also, I can see why this book has been banned many times because of the language, alcohol and cigarette usage, and sex talk of teenage boys.
Rating:

Posted by AnAddictedBookReader at 3:31 PM