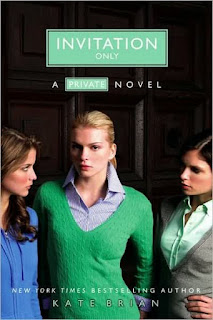 Reed Brennan's future is looking as bright as the two-karat diamonds in her new housemates' ears. Being accepted to the most prestigious private boarding school in the country wasn't enough for Reed. She had to break every rule to do it, but she has accomplished the impossible:

Reed is a Billings Girl now. And with her new status come respect, envy, and, most important, opportunity. Not to mention the parties. Unfortunately, at the next illicit party in the Easton campus woods, her roommate snaps some pictures of Reed in more than one compromising position. She uses the photos to blackmail Reed: Dig up dirt on the most powerful and popular Billings Girls or she will have Reed expelled.

And speaking of parties, the Legacy is coming up. It's the invitation-only Halloween party in NYC and it's rumored that Thomas -- Reed's MIA boyfriend -- will be making an appearance there. Too bad Reed isn't even close to invited. Life as a Billings Girl is every bit as glamorous as Reed imagined. What she didn't bargain for is the tangled web of private lies these girls weave.

Invitation Only was a great sequel to the scandalous first book Private. The series are nice, quick reads. I read this one in less than 2 hours. The second one goes more into the story of how Reed has to prove herself to the other elite Billings girls. It was filled with deception, blackmail, and a little sneaking around. The books are a lot like Gossip Girl but are more fun to read. I would never do any of the mean and petty things the girls do in the books, but it's still fun to read about the scandals in these types of books. The ending was quite shocking, and of course left me craving to read the next book in the series, Untouchable.

Posted by AnAddictedBookReader at 9:00 AM