Guardian of the Dead: DAC Review 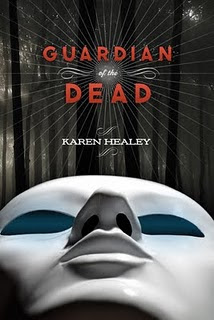 Summary from Amazon:
This is an intriguing YA urban fantasy in the tradition of Holly Black and Wicked Lovely. Set in New Zealand, Ellie's main concerns at her boarding school are hanging out with her best friend Kevin, her crush on the mysterious Mark, and her paper deadline. That is, until a mysterious older woman seems to set her sights on Kevin, who is Maori, and has more than just romantic plans for him. In an effort to save him, Ellie is thrown into the world of Maori lore, and eventually finds herself in an all-out war with mist dwelling Maori fairy people called the patupaiarehe who need human lives to gain immortality. The strong, fresh voice of the narrator will pull readers in, along with all the deliciously scary details: the serial killer who removes victim's eyes; the mysterious crazy bum who forces a Bible on Ellie telling her she needs it; handsome, mysterious Mark who steals the Bible from her and then casts a forgetting charm on her. All of this culminates in a unique, incredible adventure steeped with mythology, Maori fairies, monsters, betrayal, and an epic battle.

Review:
Guardian of the Dead was an interesting and original but a very confusing book full of New Zealand mythology and history. I really was excited to read this book, and the beginning kept up to my beforehand excitement. The beginning was really good, and I really liked how it was written and the characters. Once I hit the middle, the story became very confusing with all the Māori mythology which I didn't really understand and I couldn't follow the history. I really liked the different mythical creatures, but I wish I knew more about the Māori and their culture, so I could've understood the book better.
Besides the mythology, I really liked the characters. The main character Ellie was a great character, and I loved reading from her point of view. I also liked her best friend Kevin, Iris, and her crush Mark. All the characters even the magicians were nicely developed and fun to read about. The ending wasn't as boring as the middle because there was lots of action. The ending was surprising and pretty good. In conclusion, I really liked the characters and the exposition of the story. The middle was a little boring and confusing, but the ending wrapped everything up and was even a little sad. I wish I had liked the story I little more, but I still recommend reading it. I look forward to reading more from the debut author Karen Healey because I really liked her writing style and the original story line.
Rating:

Posted by AnAddictedBookReader at 1:13 PM