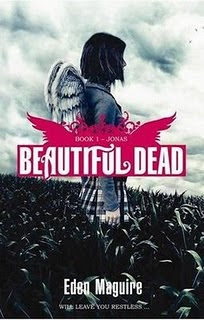 Title: Beautiful Dead Book One: Jonas
Author: Eden Maguire
Pages: 271
Publisher: Sourcebooks Fire
Publication Date: March 1, 2010
My Edition: ARC Paperback
Reading Level: Young Adult
Received From: Sourcebooks Fire
Summary from Amazon:
Not alive. Not dead. Somewhere in between lie the Beautiful Dead.
Something strange is happening at Ellerton High. Phoenix is the fourth teenager to die within a year. His street-fight stabbing follows the deaths of Jonas, Summer, and Arizona in equally strange and sudden circumstances. Rumors of ghosts and strange happenings rip through the small community as it comes to terms with shock and loss.
Darina, Phoenix's grief-stricken girlfriend, is on the verge. She can't escape her intense heartache or the impossible apparitions of those that are meant to be dead. And all the while the sound of beating wings echos inside her head...
And then one day Phoenix appears to Darina. He tells her that she must help Jonas-the first of the four to die-right the wrong linked to his death. Only with her help can Jonas finally rest in peace. Will love conquer death? And if it does, can Darina set it free?

Review:
Jonas was a intriguing, fantasy book filled with romance, action, and mystique. The story was very easy to follow, and I read it very quickly. The characters were unique, and I really liked the main character Darina. The characters could have been a little more developed and have a little more description. Darina's a troubled girl who has to mourn over her boyfriend's death, but then when she sees him and three other dead students, she feels like she's going crazy. But really, she has just been let in on a secret of the Beautiful Dead. The whole idea of the Beautiful Dead was pretty neat, and I enjoyed reading about them.

I really liked the plot and story because they were different than other fantasy books and had lots of originality. Some of the characters' names were cool and unique which was nice i.e. Darina, Phoenix, Jonas, Arizona, and ect. The end was very surprising and very action packed. I was not expecting what happened at all...lots of twists and turns. The book is pretty fast-paced, and I read it basically in one sitting. I really enjoyed the first book in the series, so I'm looking forward to reading the next book which is Beautiful Dead Book Two: Arizona.

Posted by AnAddictedBookReader at 11:08 PM