Hey everyone, hope you all had a great weekend! I'm very excited and sad for the LOST series finale. I've been a HUGE fan since the beginning about six years ago. I can't imagine how it will all end.
Anyways, I finally got a Twitter account for my blog! I don't really know how it all works, but you can follow me @AddctdBookReadr!
---------------------------------------------------------
In My Mailbox was started by The Story Siren. IMM is where I post the books I won, received for review, bought, borrowed, or ect. Since I only got one book this week, I just posted a picture of the cover and description from Goodreads. Here is the book I got this week for review from the author Amanda Hocking! 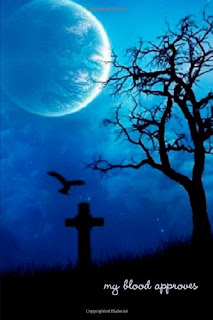 My Blood Approves
By: Amanda Hocking

Seventeen-year-old Alice Bonham's life feels out of control after she meets Jack. With his fondness for pink Chuck Taylors and New Wave hits aside, Jack's unlike anyone she's ever met. He does things shouldn't even be humanly possible, but she can't help but feel safe with him.Then she meets his brother, Peter. His emerald eyes pierce through her, and she can barely breathe when he's around. Even though he can't seem to stand the sight of her, she feels drawn to him. But falling for two very different guys isn't even the worst of her problems. Jack's family holds a secret, one that threatens to Alice with mortal danger.

Posted by AnAddictedBookReader at 8:46 PM

Email ThisBlogThis!Share to TwitterShare to FacebookShare to Pinterest
Labels: Amanda Hocking, In My Mailbox, Lost, My Blood Approves, Twitter