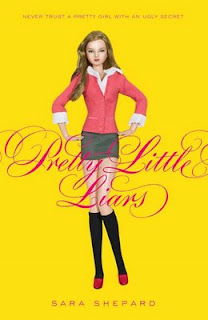 
Summary from Goodreads:
Everyone has something to hide—especially high school juniors Spencer, Aria, Emily, and Hanna. Spencer covets her sister's boyfriend. Aria's fantasizing about her English teacher. Emily's crushing on the new girl at school. Hanna uses some ugly tricks to stay beautiful. But they've all kept an even bigger secret since their friend Alison vanished.
How do I know? Because I know everything about the bad girls they were, the naughty girls they are, and all the dirty secrets they've kept. And guess what? I'm telling.
Review:
Pretty Little Liars was filled with mystery, secrets, lies, four former best friends, and even worse someone who knows everything. It was very, very hard to stop reading and very addicting. Some parts in my opinion were a little unrealistic because I never would have done any of the stuff the friends did in seventh grade and wouldn't even do now e.g. drinking and smoking. Other than that, I can't wait to read more about their secrets and watch the show that comes on this Tuesday on ABC Family!

The former friends stories are all very different but all have major secrets that could ruin their lives. Their best friend Ali disappeared three years ago and now in the present, they are getting weird messages from the mysterious "A" who apparently is set on ruining their lives and revealing their secrets. They all share a hideous secret and all is starting to fall apart. The story was pretty out there but was very interesting and enjoyable to read about the girls' lives. Parts were very juicy with gossip and drama, and it also was pretty easy to keep up with all the characters. I liked that each chapter was based on only one of the girls at the time, so it was easier to understand what was going on with each character.

I loved the first book in the series, so I can't wait to devour the others! I really enjoyed the story and characters, so I know I will definitely finish the other books in my box set quickly. I've actually already started the second book and can't believe the secret they all have kept for so many years. If you've seen the preview on ABC Family for the Pretty Little Liars and have been pondering whether to read the series or not, I definitely recommend that you do! Also, if you are just looking for a juicy, scandalous mystery then this series is for you too.

Posted by AnAddictedBookReader at 5:24 PM