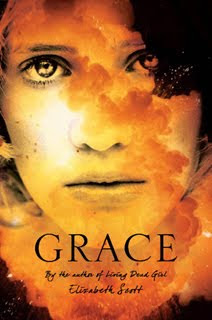 Grace was raised to be an Angel, a herald of death by suicide bomb. But she refuses to die for the cause, and now Grace is on the run, daring to dream of freedom. In search of a border she may never reach, she travels among malevolent soldiers on a decrepit train crawling through the desert. Accompanied by the mysterious Kerr, Grace struggles to be invisible, but the fear of discovery looms large as she recalls the history and events that delivered her uncertain fate.

Told in spare, powerful prose, this tale of a dystopian near future will haunt readers long after they've reached the final page.

Review:
Grace tells a very powerful and horrifyingly, realistic story of a young girl, in a distant future, born an Angel who must die as a suicide bomber. The story was extremely well written and very hard to resist. It was very short but every word nicely contributed to the amazing story of Grace who's trying to escape her fate. The dystopian setting seemed scary but also very realistic, so I truly hope our world would never come to one dictator ruling the country. The few characters in the story, mainly Grace and Kerr, had very troubled childhoods, and they learn to bond through their illegal train ride escape to the border in order to stay alive.

Grace is a strong and brave girl who's story is very intense. Since she is an Angel, she must die by a suicide bomb but escapes her fate to keep living. Her people of The Hills live to send a message to Keran Berj to let him know there are people fighting against him. From the day she was born Grace knew her propose in life, but when her day comes, she decides to do anything in order to survive. She fails as a Angel and has to live everyday knowing that many people died from her bomb. Grace meets a boy who decides to help her but later we learn he has ulterior motives in agreeing to help. She boards a miserable train crawling with soldiers through the desert, and finally meets Kerr who will act as her brother. They travel together and learn more about themselves and each other in the process.

Grace wasn't sugar coated or fluffed as it describes a world where absolutely no one would dream to be. Elizabeth Scott's novels are all fantastic, and she definitely knows how to write several YA themes including romance, friendship, dystopian, kidnapping, and many more. Grace is the most compelling and thought-provoking YA novel of the year and will leave you craving to know if they will escape. I loved Grace because I had no idea what to expect and was satisfied behind belief by Grace's unexpected, powerful story. The cover is absolutely beautiful and is the perfect cover for such an amazing book! You will not be disappointing by Grace, so it's a definite must read and highly recommended.
Rating:

Posted by AnAddictedBookReader at 4:51 PM