Cracked Up to Be Review 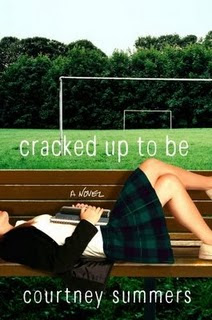 Title: Cracked Up to Be

Number of Pages: 224
Genre: Contemporary
Publisher: St. Martin's Griffin
Publication Date: December 23, 2008
My Edition: Bargain Book Paperback
Reading Level: YA, Ages 14+
Bought From: Amazon
Author's Website: courtneysummers.ca
Summary from Goodreads:
This year, Essie Green’s life is going to be different. She’s made the cheerleading squad and caught the eye of the captain of the football team
...more What's the worst thing you've ever done? When "Perfect" Parker Fadley starts drinking at school and failing her classes, all of St. Peter's High goes on alert. How has the cheerleading captain, girlfriend of the most popular guy in school, consummate teacher's pet, and future valedictorian fallen so far from grace?

Parker doesn't want to talk about it. She'd just like to be left alone, to disappear, to be ignored. But her parents have placed her on suicide watch and her counselors are demanding the truth. Worse, there's a nice guy falling in love with her and he's making her feel things again when she'd really rather not be feeling anything at all.

Nobody would have guessed she'd turn out like this. But nobody knows the truth. Something horrible has happened, and it just might be her fault.
A fresh, urban twist on the classic tale of star-crossed lovers.
When Brittany Ellis walks into chemistry class on the first day of senior year,...more
Review:
Cracked Up to Be was an amazingly witty, thought-provoking, and funny novel about a girl who's determined to shut everyone out and to let her her life spiral out of control because of the events of one drunken night. The book is relatively short, so I read it all in just a couple of hours because I just could not stop reading. After finding on Amazon that Cracked Up to Be was selling a really cheap Bargain Book version, I knew I had to buy it because of all the great things that I've heard about it and the author. Because of that, I did have a high expectation going in, so fortunately the story was so much better than I could have ever imagined.

The story definitely addressed many tough high school situations and problems along with a brutally, honest female main character. Parker is one of those unforgettable characters whose story will keep you thinking about it long after finishing and also a story you will never forget about. She was so easy to hate because of her brutal personality but also so hard not to love and to relate to her. If I ever meet a girl like her, I have no idea how I react to her personality and behavior. I truly fell in love with the sweet and forgiving new kid's character Jake. He never gave up on trying to befriend and be around Parker even though she could be a real bitch most of the time. Parker's exboyfriend Chris was also pretty lovable since he couldn't stop loving and protecting Parker.

At one point, I even cried because of an emotional part in the middle of the book. I really enjoyed the fast-paced plot and also trying to figure out what made Parker crack and to decide she wanted to lose everything she worked so hard to get. By the end, you will definitely feel so much emotion for her as you find out what actually happened that night to her best friend. I have no complaints or anything that I didn't like about the book because it was just that great!

Overall, Cracked Up to Be was an amazing story with several unique and great characters that will have you wondering all along what really happened that night that caused Parker's breakdown. I highly, highly recommend picking up a copy immediately if you haven't read it yet. I'm really looking forward to read Some Girls Are and then her new book coming out this winter!
Rating:

Posted by AnAddictedBookReader at 4:15 PM

Email ThisBlogThis!Share to TwitterShare to FacebookShare to Pinterest
Labels: 5 star, Courtney Summers, Cracked Up to Be, review