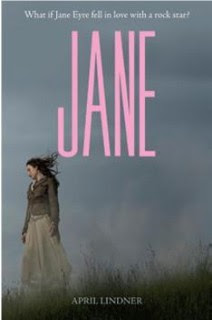 Received From: Hip Scouts
Summary from Amazon:
Forced to drop out of an esteemed East Coast college after the sudden death of her parents, Jane Moore takes a nanny job at Thornfield Park, the estate of Nico Rathburn, a world-famous rock star on the brink of a huge comeback. Practical and independent, Jane reluctantly becomes entranced by her magnetic and brooding employer and finds herself in the midst of a forbidden romance.

But there's a mystery at Thornfield, and Jane's much-envied relationship with Nico is soon tested by an agonizing secret from his past. Torn between her feelings for Nico and his fateful secret, Jane must decide: Does being true to herself mean giving up on true love?

An irresistible romance interwoven with a darkly engrossing mystery, this contemporary retelling of the beloved classic Jane Eyre promises to enchant a new generation of readers.
A fresh, urban twist on the classic tale of star-crossed lovers.
When Brittany Ellis walks into chemistry class on the first day of senior year,...more
Review:
April Lindner wrote a refreshingly sweet and enchanting debut novel about a young woman's experience through a loss, finding love, and discovery of beautiful self. Jane is a modern retelling of the classic Jane Eyre by Charlotte Bronte and was so fantastic that by the end, I longed to start reading the classic Jane Eyre right away! The wonderful loveable characters and story were so great and very hard not to like, that to stop reading was virtually impossible. The reality of the plot ever happening is slim to none though, but besides that it was highly enjoyable to read.

Jane even though being a retelling of a classic was very unique and enjoyable. Jane knew her true self and her place in the world, but when suddenly both of her parents die leaving her with practically no money, she's forced to drop out of college and find a job as a nanny. Since Jane fit the criteria of level headed, non girly-girl, nor a obsessed fan of pop culture, she landed the job as being the nanny of a mega rock star's daughter Maddie. The story is all about Jane's experience at the Thornfield Park Mansion and the many new people she meets while there. All throughout the story were so many things I would have never expected but enjoyed them greatly! The romance in the story between Jane and her boss was sweet and irresistible, it made the story that much better.

Nico, Jane, and Maddie have made the list as some of my favorite characters from all the books I've read. They all had such unique personalities that made them much different than all the other literary characters but in a very good way. There were so many happy than sad moments but thankfully the end ended on a happy high note which I just adored. I loved Jane so much and definitely can't wait to read more from April Lindner in the future!

Posted by AnAddictedBookReader at 9:13 PM