"Waiting On" Wednesday is a weekly event hosted at Breaking the Spine, that spotlights upcoming releases that I'm eagerly awaiting. This week I can't wait for Only the Good Spy Young by Ally Carter. I really liked the first two in the Gallagher Girls series, so I really want to read the third book and this one! The cover is so cute and the title as catchy as the others. It comes out next summer on June 15th, 2010. 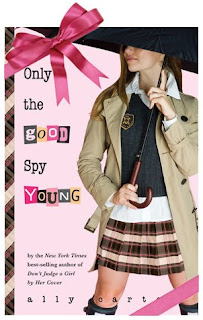 Only the Good Spy Young
(summary from Goodreads)
By: Ally Carter
When Cammie Morgan enrolled at the Gallagher Academy for Exceptional Young Women, she knew she was preparing for the dangerous life of a spy. She just didn’t know that life would start during her junior year of high school. But that’s exactly what happened two months ago when Cammie faced off against a mysterious organization called the Circle of Cavan. Now, even Cammie “The Chameleon” can’t hide. Danger has followed her to London where she discovers a trusted ally has been labeled a rogue operative. The Gallagher Girls quickly realize that the Circle’s agents are closer than they’d ever feared—maybe even within Gallagher Academy’s own walls. History of Espionage takes on an entirely new meaning as Cammie and her friends go looking for answers, recognizing that the key to Cammie’s future may lie deep in the past.

Posted by AnAddictedBookReader at 11:47 AM

Email ThisBlogThis!Share to TwitterShare to FacebookShare to Pinterest
Labels: Ally Carter, Only the Good Spy Young, Waiting on Wednesday