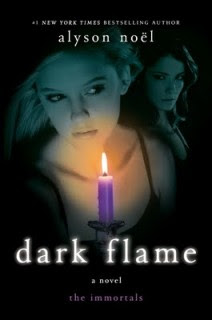 Borrowed from: the Library
Summary from Goodreads:
At the start of this mesmerizing new installment of the Immortals series, Ever is helping her friend Haven transition into life as an immortal. But with Haven drunk on her new powers and carelessly putting them all at risk, their friendship becomes more and more strained. At the same time, Ever delves deeper into magick in order to get control over her enemy Roman and free Damen from his power. But when the spell she casts on Roman backfires, she’s bound to her deadliest enemy. Frantic to reverse the spell the moment the moon enters a new phase, she finds her efforts are fruitless—there’s a strange, foreign pulse coursing through her, one that propels her toward Roman. Desperate to break free of this terrible curse before Damen or the twins can discover what she’s done, she turns to Jude and delves deeper and deeper into dark magick, ultimately risking everything she knows and loves—including Damen.

A fresh, urban twist on the classic tale of star-crossed lovers.
When Brittany Ellis walks into chemistry class on the first day of senior year,...more
Review:
Dark Flame was another great edition to the Immortals Series with a lot more drama and even a major quad love triangle between Ever and her men: Damen, Jude, and Roman. The plot flowed pretty slowly for the most part, but Ever was very dramatic and her trouble & drama were there every step of the way which made the story much more interesting. Between Haven becoming an Immortal & her infatuation with her new powers and Roman and also Ever's many struggles to gain the cure from Roman and to stop her dark side, there was never a dull moment.

The end was super surprising and definitely not at all what I expected. I have become a little bored with the series, but I will continue to read them because I just love Ever and Damen and wish they could finally have their happyily ever after. I hope the last two are better than the last three and as good as the first, so I'm excited to read Night Star when it comes out this November 16th, 2010!
Rating:

Posted by AnAddictedBookReader at 10:52 PM