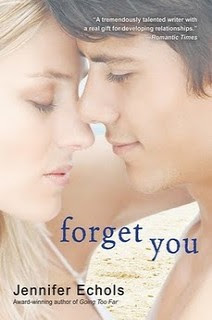 Title: Forget You
Author: Jennifer Echols
Pages: 293
Publisher: MTV
Publication Date: July 20, 2010
My Edition: Signed Galley
Reading Level: YA, Ages 14+
Received from: Jennifer Echols for review
Summary from Goodreads:
WHY CAN’T YOU CHOOSE WHAT YOU FORGET . . .  AND WHAT YOU REMEMBER?

There’s a lot Zoey would like to forget. Like how her father has knocked up his twenty-four- year old girlfriend. Like Zoey’s fear that the whole town will find out about her mom’s nervous breakdown. Like darkly handsome bad boy Doug taunting her at school. Feeling like her life is about to become a complete mess, Zoey fights back the only way she knows how, using her famous attention to detail to make sure she’s the perfect daughter, the perfect student, and the perfect girlfriend to ultra-popular football player Brandon.

But then Zoey is in a car crash, and the next day there’s one thing she can’t remember at all—the entire night before. Did she go parking with Brandon, like she planned? And if so, why does it seem like Brandon is avoiding her? And why is Doug—of all people— suddenly acting as if something significant happened between the two of them? Zoey dimly remembers Doug pulling her from the wreck, but he keeps referring to what happened that night as if it was more, and it terrifies Zoey to admit how much is a blank to her.
Controlled, meticulous Zoey is quickly losing her grip on the all-important details of her life—a life that seems strangely empty of Brandon, and strangely full of Doug.

Review:
Forget You told a sweet, romantic story involving many themes of family problems, love and loss, friendship, and trust. It was hard to put down and so good I read it in less than a day. The writing is for mature readers because of a few steamy moments that were actually pretty fun to read plus some swearing and alcohol references. Jennifer Echols definitely knows how to tell such a great, meaningful story that you will not want to put down til you're finished.

The main character Zoey is a swimmer and lifeguard like me, so it was very easy to connect with her character. At times though, Zoey did get on my nerves because she wouldn't get closer to Doug because she thinks her and Brandon are dating. She uses that excuse so often, it got very old to hear. Doug was my favorite character and probably one of the best male characters I've read in a long time. He seemed distant and mean at first but later turns out to be very sweet and sensitive. If I were him, I wouldn't have put up the things Zoey kept doing to him, but in the end it all worked out. Besides some annoyances from Zoey, I loved Zoey and Doug together, and their relationship is what kept me wanting to read just so I could find out what would happen between them. I really couldn't believe some of the sad and dramatic events that occurred in Zoey's life but was very happy with the ending.

Forget You is the first book I've read by Echols, so I'm very exciting to read many more of her novels in the future! I highly recommend reading especially if you have never read any of her books before. Also, the cover is very cute, and its the perfect cover for such an amazingly, sweet story.

Posted by AnAddictedBookReader at 1:33 PM