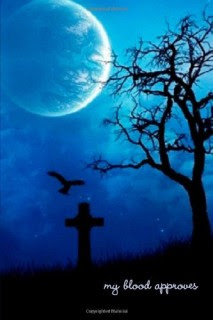 Then she meets his brother, Peter. His eyes pierce through her, and she can barely breathe when he's around. Even though he can't stand the sight of her, she's drawn to him.

But falling for two very different guys isn't even the worst of her problems. Jack and Peter are vampires, and Alice finds herself caught between love and her own blood...
Review:
My Blood Approves tells a unique story of a vampire romance with a twist pretty different than most of the vampire stories I've read. Since the tremendous success of the Twilight saga, the popularity has brought tons of literature and movies that involve immortal and fantasy characters. Since then, every book I read that includes vampire characters seem to be rip offs or very similar to Twilight. Stories about vampires are definitely not at all new  and Twilight is also definitely not the most original either. So with that said, My Blood Approves' vampires had some very unique characteristics but the plot had several similarities to the saga. Besides the similarities, the story was very good and very hard to put down because of the romance, drama, and suspense.

The story is about Alice who's saved by a mysterious, older boy while in a sticky situation who later turns out to be a vampire. He attracts everyone around her except herself until she meets his family and they all start to bond over their unusual situation. With the knowledge of their true selves, her life turns upside down and results in her and the two vampire brothers to be in a very messed up love triangle. The stress of their messy relationship was so much fun to read, and I really enjoyed trying to figure out who Alice would end up with, either Jack who is lovable and kind or the one she is meant for the irritable and confused Peter. I loved Jack because he was so funny and nice, but I rooted for Peter and Alice together because her blood is meant for him.

The writing was good but there were several grammatical mistakes which did take away from the story. Besides that, I highly enjoyed My Blood Approves and really need to read the next two in the series. Unfortunately I don't have an ebook reader to read them on, otherwise I would buy them. The covers of the series are absolutely gorgeous and just love the clouds and trees on the vibrant background colors. Hopefully I can read Fate and Flutter very soon. You can buy the ebook of My Blood Approves for only 99 cents at Amazon, so I would recommend buying it right away. Thanks to Amanda for providing with a copy in exchange for a review!

Posted by AnAddictedBookReader at 7:15 PM