"Waiting On" Wednesday is a weekly event hosted at Breaking the Spine, that spotlights upcoming releases that I'm eagerly awaiting. This week I can't wait for Bright Young Things by Anna Godbersen which is the first book in a new series by the author of the Luxe series. I just bought the first three in the Luxe series library, so I'm excited to start those. Can't wait to read it when it comes out this October 26, 2010! 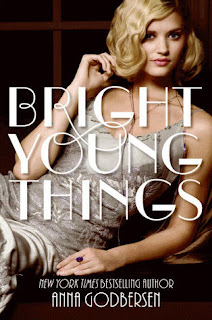 Bright Young Things
By: Anna Godbersen
Short Description from Goodreads:
----------------------------------------
Bright Young Things is the first in an epic four-book series about three teenage girls finding their way in the glittering metropolis of New York City and the glamorous mansions of Long Island. It’s 1929 and Letty Larkspur and Cordelia Grey have escaped their small Midwestern town to chase big dreams and even bigger secrets. In New York, they meet Astrid Donal, a flapper who has everything she could ever want, except for the one thing Letty and Cordelia have to offer—true friendship. Set in the dizzying summer before the market crash, against the vast lawns of the East End and on the blindingly lit stages of Broadway, the three girls will find romance, intrigue, and adventure.

Posted by AnAddictedBookReader at 9:11 PM