In My Mailbox is where I post the books I bought, borrow, won, or received this week. IMMB was started by Kristi of The Story Siren and inspired by Alea of Pop Culture Junkie.

I got a lot of books this week! I already did a post of all the books I received in the box of books contest. I won an autographed hardback of A Sweet Disorder by Jacqueline Kolosov a while ago and got it this week too. Here's the summary and cover of A Sweet Disorder: 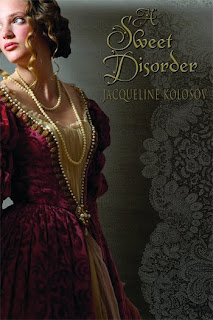 Sixteen-year-old Miranda has no idea how much her life is going to change upon hearing the news of her father's death. Left with little dowry to offer, Miranda faces a broken engagement and is sent to live with her father's cousin, Earl John Hardwood, and his wife, whose primary goal is to take her to court and marry her off to the insufferable Lord Seagrave, for their own profit.
At Queen Elizabeth's court, Miranda soon learns that a large part of her survival will depend on knowing who to trust. When Miranda distinguishes herself from the rest of the maidens with her exquisite sewing and embroidery
skills, she gets the attention of the queen, much to the anger and jealousy of courtiers, ladies-in-waiting--and even a trusted "friend."
As Miranda begins to win the Queen's favor, she is given the ultimate test-to recreate Elizabeth's mother's (Ann Boleyn) coronation gown. Miranda knows this is her opportunity to escape the shackles of convention and get out of the
marriage to Lord Seagrave, instead establishing an independent life at court as the queen's seamstress. But what of her future with Henry Raleigh, the man to whom she was once promised and has always loved?

Posted by AnAddictedBookReader at 3:49 PM

Email ThisBlogThis!Share to TwitterShare to FacebookShare to Pinterest
Labels: In My Mailbox